Everyone has their own idea of what spirituality is according to their own perception. But most people would think that it is a combination of having some sort of faith in a higher power, attending a place of worship, reading scriptures, meditating and carrying out charitable acts. Personally, I think those things have an association with spirituality but they themselves are not spirituality per se. To me spirituality is the expression of spirit through the physical form here in the world of matter. That’s another way of saying “living our truth” or “listening to and following our inner voice (conscience)”, regardless of the circumstances.

We are all spirit whether we like it or not and whether we care to accept it or not, and the purpose for incarnating into flesh is for us to experience what the soul knows, but cannot experience itself because it is pure consciousness. Then, through this experience, to realize the truth of The Self (who we really are), or to put it another way; to become self-realized or awakened. The physical world is always in Divine and perfect order, even though it may not seem like it at times, but for us to know that something is beautiful we have to have something ugly to compare it with, otherwise we would never know when we were gazing upon beauty. Of course, it goes without saying that “beautiful” and “ugly” are merely relative and a matter of opinion. What this all means is that we may not necessarily enjoy everything that we experience, which stands to reason if we are not awakened souls and therefore unable to transcend the physical illusion. Now, back to the main focal point of this article; “what is spirituality”. 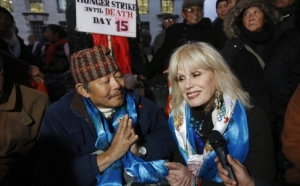 As I said above, spirituality to me is the expression of spirit through the physical form, but not just any old expression; what it is, is an expression of truth regardless of the circumstances. Take for instance the Gurkha, Gyranraj Rai who was on hunger strike outside 10 Downing Street (the British Prime Minister’s main residence in London for the benefit of my overseas subscribers) and who was prepared to die for the cause he believed in. Not only that, if MPs had not agreed to look into the issues that Mr Rai was protesting about, and he had indeed departed this earth, there was another Gurkha waiting in line to take his place, and another if need be and so on. Those amazing souls were prepared to live their truth even though the consequences were very serious.

Then there is the wonderful Malala Yousafzai who was shot because she wanted the basic right to be able to go to school, and who at the tender age of 16 was recently announced as one of the winners of the 2013 United Nations Human Rights Prize. Her expression of spirit was a show of great courage in the face of incredible adversity. I’m also reminded of another great feat of courage from the time when I lived in Wales, but probably not one that you would expect me to be posting here.

I am reminded of a cross-gender person I knew when I lived in West Wales; her name was Melony. She must have been in her late 50’s or early 60’s at the time and was the sweetest person you could ever meet. She wore the type of clothes you would expect a “lady of a certain age” to wear, the only thing was that Melony was obviously a man. She was very tall and had rather large hands, she was unmistakably a man. But as I said, she was a very kind and sweet person; also a church-goer and personality wise, she was a woman; not camp in any way but plainly and simply a woman. One day I was out and about in Aberaeron and I bumped into Melony and another man who was not cross-gender, and I’m ashamed to say, that when I stopped to talk to her I was looking around nervously in case anyone I knew walked past and saw me talking to a man in woman’s clothes. The reason I’m sharing this here is because the way that Melony chose to live her life was also an amazing display of courage. The body was that of a man, but inside she was a woman.

Try to imagine this; how many people would have carried on living a lie; not expressing their truth, for the sake of looking normal on the outside. Imagine what it would be like, every time you go out in the street, to have people sniggering behind your back and pointing the finger at you. Imagine the abuse that people like Melony have to take, both verbal and physical, simply for having the courage to live their truth. She was renowned among people who knew her as being very kind and caring and I personally noticed that she had the most gentle character; I also remember that she owned a large white van and would get asked from time to time to do removals for people. Yes, I’m sure she has faced great adversity and experienced the pain that goes hand in hand with the life she has chosen; but I bet the pain she has experienced is nowhere near as excruciating as the pain she would have felt inside had she chosen to ignore her inner voice and live a lie.

None of us know how courageous we are until our courage is put to the test.