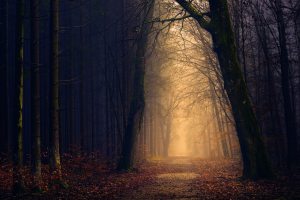 Photo by Johannes Plenio from Pexels

A group of monks were walking through the forest with their master on a windy, Autumn day.  Fallen leaves were strewn all over the ground, and leaves falling in the moment performed a frenzied mid-air dance as the gusting currents stamped their assertiveness. All in all, it was a real hive of activity as Mother Nature’s breath breathed life into the natural surroundings of the forest.

There came a point where one particular monk found himself to be the only one walking near to the master; one group bringing up the rear and another group walking at a brisk pace in front.  The monk was desperate to ask the master a question, and wishing to take advantage of the opportunity said, “master I have been meaning to ask you something, have you revealed everything or are you still hiding something from us?”

The master replied, “look at my hand, it is wide open like this forest.  People who hide things are like fists”, and he reached down and picked up a handful of leaves.  Standing there with the leaves clenched in his fist he said, “see, now you can’t see the leaves, they are hidden”.  As he opened his hand, letting the leaves flutter away, he said, “I have revealed everything, if you think that something is still hidden, it is because of you, not me.”

This parable explains how we always try to project our own insecurities and issues onto other people.  It is another example of how our conditioning in early life causes us to develop traits and mindsets that become ingrained.in our psyche.  These traits are fear-based and have their roots in our inability to love ourselves.  The monk was insecure; he didn’t trust, so he tried to put the ball in the master’s court.

The truth, like the master’s open hand, is always there in nature; almost slapping us around the face; willing us to open our eyes.  But, it is like Edison and his lightbulb, it took him over a thousand attempts to eventually create his wonderful invention.  People laughed at him, but in the end he simply said that there were over a thousand steps in the process.  So it is with human beings; Mother Nature has to keep metaphorically bashing us on the head until the penny finally drops and we recognise the beauty of our own spirit, and shine our light into the world.

2 thoughts on “The Windy Day”