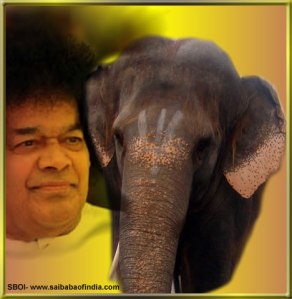 It is probably the greatest love story in the history of the planet; The Avatar, Sri Sathya Sai Baba and Sai Gheeta the elephant.  Years ago a tiny elephant was crying out in the bush, all alone and afraid.  Some miles away in the village of Puttaparthi a “young” Avatar in the shape of Baba heard the infant’s cry and went to its rescue.  The elephant was so small that Baba was able to pick it up and put it in the back of a Land Rover; and so was born, the greatest love story ever.  Swami called the elephant “Sai Gheeta” and the two were together until May 2007 when Sai Gheeta departed this earth.  The elephant absolutely loved Baba beyond words and would get very agitated if ever he had to go away.  On one occasion Sai Gheeta kicked up such a fuss when he sensed Baba was leaving the ashram that Baba actually abandoned his engagement.

I remember watching a video that aptly demonstrated the pure and unconditional love that existed between Avatar and elephant.  Baba, in pristine orange robe, was petting Sai Gheeta who had a lot of saliva coming from his mouth.  Swami’s upper robe became drenched with elephant saliva but he simply carried on petting his loving devotee and didn’t even bat an eyelid.

After Sai Gheeta left his body Swami acquired another elephant, a female this time, who we were told was called “San Gheeta”.  During my first visit to Puttaparthi it did not even occur to me to find out where the elephant was kept and go and pay my respects; in fact, during my first visit in October 2009 I did not even realise that Sai Gheeta was no longer in his body.  However, during my second visit in February 2010 my then girlfriend, Ciara, mentioned Baba’s elephant and said we should find out where it’s kept and go and have a look.  We established that the elephant compound was up the road from the ashram, past The Hill View Stadium and on the other side of the road; approximately three-quarters of a mile away.  So, towards the end of our stay we decided to pay the elephant a visit.  We did a recce and found the compound and also found out the time when San Gheeta would be let out for her daily exercise.

The time came to go and visit the elephant compound, but as we set out we had no idea that Baba was to shower us in his blessings and grace beyond our wildest dreams.  The designated time for San Gheeta to appear was 4.00 p.m., but, as anyone who has visited India will be able to tell you, this is 4.00 p.m. Indian time.  What this means basically is that it could be anytime.  But we arrived outside the compound gate and waited patiently.  A seva dal arrived soon after and he confirmed that 4.00 p.m. was indeed the time for San Gheeta’s exercise.  As you can imagine 4.00 p.m. came and went and there was no sign of San Gheeta.  We looked through the wrought iron gate for any sign of activity, but there did not seem to be anything going on.  I should also point out that you are not normally allowed inside the compound.

All of a sudden, out of the blue, a seva dal came and unlocked the gate and ushered us inside (along with another man with a small child).  We couldn’t believe our luck!  As we entered the compound the Samadhi (tomb or resting place) of Sai Gheeta was on the right.  We were ushered a bit further on and then around to the left was San Gheeta with her mahout (keeper).  At first we did not like what we saw.  The elephant had chains around her feet and appeared to be in distress.  But we came to the conclusion that she was quite boisterous and would need to be restrained at times; she would also have been excited knowing that it was time for her exercise.  She was obviously very young, but absolutely huge.  The mahout unfastened the chains and guided her out of her little compound within the compound.

Ciara had a camera with her and the seva dals said we could take as many photos as we liked, and we took full advantage of this (see pic below).  She was absolutely beautiful.  Her eyes were just like human eyes, only much bigger, and she was gurgling just like a baby.  But what was really amazing was that she was SMILING.  Yes, San Gheeta was smiling; and her smile looked so human.  She just stood there while we petted her; it was such a fantastic experience and we knew that it had been engineered by Swami.  It was soon time to take the elephant out for her exercise and we followed as the mahout guided her to the compound gate.  Once outside she was guided right, down along the main road through Puttaparthi.  It was quite amusing really because she was just plodding along, looking so happy with this grin on her beautiful face, but because she was so huge we had to almost jog to keep up.  There was a video facility on Ciara’s camera that allowed five minutes recording time, so I recorded a five-minute video of proceedings.  Outside the compound we were joined by a Russian lady with her child who tried to feed San Gheeta bananas as she thundered along the road.  We then turned left into The Hill View Stadium, which sadly, meant that our amazing experience with the most beautiful of creatures was over; it all seemed to happen so quickly.  In the photo below, San Gheeta can be seen exiting the Samadhi of Sai Gheeta.  We were told that she likes to go into the samadhi as if she is making a spiritual connection with her departed “brother”, and this is exactly what she did on her way out of the compound.

Ciara and I split up soon after returning to England so I no longer have access to that video.  But I often think about the time we spent in the company of San Gheeta, all because of the loving grace of Sri Sathya Sai Baba.  I will never forget her eyes, her gurgling sounds and her wonderful smile. Who says elephants aren’t human! 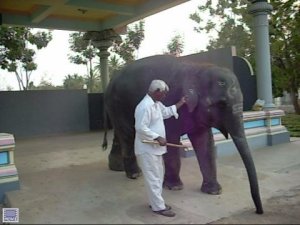