It gives me great pleasure to showcase friend and wonderful RomCom Author, Sheryl Browne on my blog today.

Sheryl Browne grew up in Birmingham, UK, where she studied Art & Design. She wears many hats: a partner in her own business, a mother, and a foster parent to disabled dogs. Sheryl has been writing for many years, the road along the way often bumpy.  She was therefore thrilled beyond words when Safkhet Publishing loved her writing enough to commission her to write for them.

Sheryl’s debut novel, RECIPES FOR DISASTER – combining deliciously different and fun recipes with sexilicious romantic comedy, is garnering some fabulous reviews and has been shortlisted for the Innovation in Romantic Fiction Festival of Romance Award. Sheryl has since been offered a further three-book contract under the Safkhet Publishing Soul imprint. SOMEBODY TO LOVE, a romantic comedy centering around a single father’s search for love and his autistic little boy, launched July 1. WARRANT FOR LOVE, bringing together three couples in a twisting story that resolves perfectly, released August 1 and A LITTLE BIT OF MADNESS releases Valentine’s Day 2013.

Hi Richard!  Thank you so much for hosting me! I’m thrilled to be here on your fabulous blog! Today, I’m sharing the second of eight excerpts from Warrant for Love. I hope you enjoy! Please do leave your comment and (appropriate) suggestions as to what YOU might do if you found yourself in Lee’s situation.

Life for Paul sounds like your typical country song. He comes from a broken home, his wife is divorcing him, he’s got no place to live, he’s losing custody of his son, and his sergeant, who’s sleeping with his wife, is a loud-mouthed braggart who won’t let up on him – not even at work.

Leanne’s caught her (now) ex cheating on her again, but before she can give him the what-for, she’s wrongfully arrested for soliciting – by Paul and his partner. One thing leads to another and things could be looking up for Paul, except for Leanne’s friends – quarrelling mom Nicky and financial goddess Jade – have it out for her ex.

Leanne wants closure, Paul wants a home, and Nicky and Jade want revenge. Blackmail, lies, adultery, entrapment. Will it all work out in the end or will Paul uphold the law? It sounds like he needs a Warrant for Love.

Leanne was still reeling as she stood on the street corner, her thighs so cold they resembled freshly plucked turkey. She tried hard not to cry as a patrol car cruised by, and wondered obliquely where Richard had parked his BMW whilst indulging in the kind of sex that left naked footprints on the windscreen.

Ten minutes ticked by and still there was no taxi in sight. She turned back towards the phone box and oh, joyous relief, a car pulled up. The taxi. It must be.

But it wasn’t. It was Richard, taking his life in his hands. ‘Leanne, come back,’ he called through the open passenger window. ‘I’ve said I’m sorry.’

Leanne glared at him, then away.

‘I don’t know how else to say it. Come on, darling. It’s pouring with rain. Get in and I’ll drive you home.’

Get back in there, next to him? On the seat he’d been shagging the trollop with size ten feet in?! Was the man on a suicide mission?

‘Why? Want business, do you?’ She oozed sarcasm.

‘Blimey, there’s devotion to duty for you.’ Paul nodded at the hooker on the street corner. ‘She must be desperate, touting for business in sub-zero temperatures.’

‘So must the punter. Bit past her sell-by date, isn’t she?’ Mike observed drolly.

‘Which makes you what, Mike?’ Paul slowed down to get a closer look. ‘Aged? Or is that ageist?

Paul shook his head. ‘She’s actually quite fit looking.’ He gave her a leisurely once over. ‘Nice arse.’

‘I suppose, if you like that sort of thing.’

‘That’s just it though.’ Paul noted her dress. Skirt, short and tight — very nice, but not red light. And she wasn’t exactly giving the creep in the car the come on. ‘Doesn’t look the sort, does she? Doesn’t seem very…’ he tried to put his finger on it ‘…streetwise. Know what I mean?’

‘Uh, oh, the man is actually fancying some tom on the prowl. You are not getting enough, mate. If you need to get laid, I can put you in touch with a cracking little bird. Goes a bundle on uniforms. Not too fussed what’s in them either.’

‘Fun-ny. And I don’t. Thanks all the same.’ He didn’t, either, given his ineptitude at relationships. Wouldn’t mind trying this one on for size though, Paul mused.

Uh-uh. He pulled himself up. What was the matter with him? She charged for it. He looked her over again. He still wasn’t convinced somehow. She just didn’t fit the MO. ‘What d’y’think? Move her on, or go around again?’

Mike looked at him askew. ‘Give her a chance to shift her backside, you mean?’

‘She hasn’t actually propositioned the guy yet, Mike, has she?’

‘She’s on the pull, mate,’ Mike scoffed. ‘I’d bet my pension on it. Go on, go round again. Ten-to-one she’ll be quoting her price list when we get back.’

Paul supposed he was right.

Still thought she was a bit upmarket for a street corner, though.

‘Leanne, for the last time, will you get in the car?’ Richard eyed the passing patrol car worriedly. ‘Please,’ he added, as she gave him a look that could curdle milk. ‘I’ll drive you home and we’ll talk about… things.’

What things, Lee wondered. The colour scheme she was considering for the bedroom? Her miserable day? Her even more miserable future?

On her own, without he who fancied himself as Ashley Cole, a total babe magnet. More like Mr Big from SACT… Lee wished she’d pointed out his expanding midriff, breezing into town to bonk her, then blowing out again. But he wasn’t Mr Big, was he? She might have had some post-coital chocolates if he was. And she wasn’t Cheryl Cole or Carrie Bradshaw. She had absolutely no panache and precious little oomph. If she had, she’d kick his arse with her Jimmy Choo shoes and exude confidence, instead of trying to look invisible on a seedy street corner.

Lee couldn’t believe she’d invested in him, heart, soul… and money. She swallowed back a fresh crop of tears that threatened to spill over, recalling how he’d convinced her, tears brimming in his own lying eyes that the Inland Revenue were about to drag him off in shackles.

She’d been a fool. What on earth had possessed her to think her life was incomplete without a man. Without him?!

‘Leanne, come on.’ Richard sighed. ‘It’s late. You can’t hang around here on your own.’

Oh, but I can, she was about to say, but didn’t. It would be more than childish. It would be madness. She could be mugged or murdered, which would do her son no good at all. In the absence of the taxi, then, it was him or the street corner.

And he was the lesser of the two evils, she supposed. Marginally.

She pulled herself up to her full five-foot-three, and tugged her skirt down a bit. And when she got home, she’d show him the door, and tell him she’d post his shirts on in a jiffy bag, an extremely small jiffy bag.

‘Right, yer are, mate,’ she said, facetiousness full on as she wiggled to the car as tartly as she could in shoes not made for walking. ‘It’s fifty quid for full sex. Thirty for a hand job. No kissing. Cash-up-front and no cheques.’

Good God, her eyes boggled as Richard had the temerity to actually look shocked. Then boggled some more as a patrol car screeched up to spew policemen like something out of Ashes To Ashes.

One officer dashed around to invite Richard to step out of the vehicle and the other one advised Lee he was arresting her.

‘Excuse me?’ She laughed incredulously.

‘On suspicion of soliciting, madam,’ the officer informed her, stony-faced. ‘You do not have to say anything, but it may harm your defence if you do not mention anything which you later rely on in court…’

‘Soliciting?!’ Lee gawped at him. Had the whole world gone mad? ‘I am not!’ she assured him. ‘Do I look like a solicitor?’

‘Prostitute,’ the officer corrected her, his eyes full of insinuation.

And roving all over her, Lee noticed.

Unbelievable! She followed his gaze down and realised she absolutely did look like a tart. Her new white Wallis shirt was so wet it was showing her black bra beneath, nipples protruding embarrassingly therein, and the skirt was as miniscule as the officer’s brain. Lee glared at him and made a mental note. Avoid selecting attire according to man’s desire ever again. Mental note two. Avoid men.

‘Do you mind?’ She dragged the officer’s attention away from her too obvious bits.

His mouth twitched into a smile. ‘No.’

‘Anything you do say…’

‘Of course he is. And we always charge our boyfriends fifty pounds, do we, madam?’

Lee’s heart sank. ‘I was joking,’ she uttered, bewildered. ‘We had an argument and I flounced out of the car and he…’

‘Yes,’ the officer said, with a heard-it-all-before shake of his head. ‘And the pigs are primed and ready to fly.’

‘Were you born stupid?’ Lee snapped, frustration and humiliation spilling over. ‘Or do you have to work at it?’

‘Not too hard, no,’ the officer replied, deadpan. ‘For future reference, you might like to note that insulting an officer of the law is a sure-fire way to get yourself up on a second charge.’

‘But I’m…’ Lee clamped her mouth shut as he produced his handcuffs.

Oh, the utter, total humiliation. This was never in her fantasy. The handcuffs and uniform, yes, but not the prison bit.

She glanced worriedly towards Richard… but Richard wasn’t there, where he had been. He was climbing back in his BMW. He was starting the engine. He wasn’t? He was.

‘I don’t believe this.’ Lee stared after him, devastated as Richard drove off without even a backward glance.

Finding footprints on the windscreen for her boyfriend’s car as evidence of his infidelity was worst case scenario for Lee. What would YOURS be?  What would you do about it?  Witty but NOT too rude suggestions, please.  One name will be randomly selected from the blogs taking part to receive a copy of Warrant for Love. 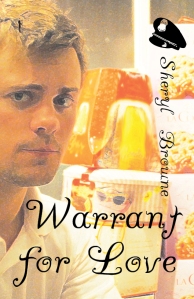 Find out more about Sheryl:

Sheryl is a loveahappyending featured Author and Editor.