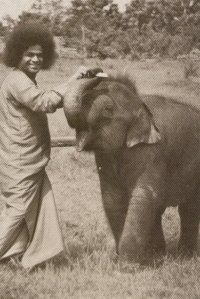 We all start off as a tiny micro-atom within that great uncreated wilderness of bliss, the ”Infinite Absolute”, the super-conscious mind of God.  Then, as if at the behest of a Divine whim, we make the transition from the uncreated to the created, from the formless into form and  become a tangible part of ”The Divine Puppet Master’s” grand plan.  From the uncreated (God The Father) we descend into matter and mingle with and become a part of the cosmic vibration (The Holy Spirit) or ”Aum”, that flows through the whole of creation like a life sustaining blood stream flowing through a human being.

From the very nano-second that we descend from the ”Cosmic Bosom” of The Divine Mother, our sole (and soul) reason for being is to make our way back.  But how?

In the beginning was the word and the word was Aum.  But the Aum alone did not have the intelligence, so God also injected The Christ Consciousness (God The Son or The Only Begotten) into the equation.  Thus could we begin our journey from form back to the formless, from the created back to the uncreated.  In our physical state we lose sight of who we really are, being only able to relate to the “outer” world as we succumb to the tricks of the mind and the five senses.  But we have also been given the tools to make inner enquiry; enabling us to know God (ourselves) through actual experience as opposed to the theological concept taught by religion.  This also is an explanation of the Holy Trinity.

From beyond vibratory creation (God The Father) came the Aum, the vibration (The Holy Spirit), and into the vibration God injected intelligence or Christ Consciousness (God The Son).  Jesus never claimed to be the only son of God, indeed he proclaimed that we are all sons and daughters of God, and the reason that God made manifest his ”Only Begotten Son” or Christ Consciousness in its purest form in the body that we knew as Jesus, was so that Jesus could teach us that we all have the potential to be like him, ”But as many as received him, to them he gave power to become the sons of God” John 1:12-13

The second coming is not going to be the day that a man with long hair and a beard, wearing a white gown and sandals comes walking down the street.  It will be the day that as individuals we resurrect the Christ Consciousness within ourselves, allowing us once again to ascend back to that uncreated wilderness of bliss.