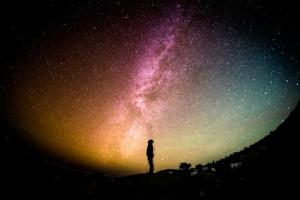 It is said that at the final stage of Self-realisation the ego merges into the Self and disappears. However, this would imply that the ego actually exists in the first place. The ultimate reality is that nothing exists except consciousness in its blissful infinite state of pure being; therefore the separate self (ego) only exists from the standpoint of duality, which is an illusion.

The concept of a single, infinite and indivisible whole is not easy for everyone to grasp, so it is perfectly acceptable to approach spiritual practice from a dualistic perspective. However, all of our spiritual practices; meditation, yoga, chanting and the study of spiritual texts, to name but a few, are nothing more than stepping-stones to finding what is already there. I have come to the conclusion that the simplest way to spiritual evolution is to do nothing in order to achieve nothing.

There is a Zen saying that says, “allow yourself to be as a hollow bamboo”, or words to that effect. What it means is to simply allow that higher power, which is your true nature, to operate through you. It is only the ego, the small “I” that needs to “do”. It knows that it ultimately does not exist and is on borrowed time, so it will do all it can to trick us into believing that we are the separate self. The individual soul was formed out of the nothing of the silent and blissful wilderness of Self, but there is never a time when it is not the Self. The trick, for want of a better word, is to understand that it is the individual soul as an ego/body/mind that is the illusion, the individual soul as Self is very real.

So allow yourself to be as a hollow bamboo and let your true nature work through you(do nothing), in order to experience your true nature of nothingness (achieve nothing). Rupert Spira explains this beautifully as, “being aware of being aware”.

4 thoughts on “Do Nothing To Achieve Nothing”