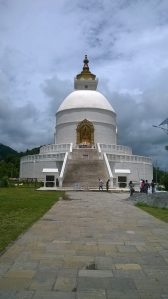 As the weeks go by I will no doubt remember little snippets from my trip and share them with you. Today is no exception. I want to share a couple of things with you; one being a general Nepali thing and the other something specific. Firstly, something I observed during my visit to Pokhara.

It was my second full day in Pokhara and I’d discovered that there was a tourist information centre. For some strange reason it was nowhere near the centre of the Lakeside area where I was staying. It was in fact a bit of a walk, but I managed to find it, and also obtained some very valuable information from the helpful staff. I should add before going any further that Nepali politics is very corrupt (isn’t it all!!) and there had been sporadic demonstrations against various political leaders and their policies in the recent past. En-route to the tourist information centre I passed by a local government building, but didn’t pay much attention to it. As I was walking back to Lakeside I could hear some sort of chanting, and I also saw a bit of a crowd in the distance. As I got closer it seemed to be the sort of sound that you can hear in schools when teachers are singing songs with very enthusiastic kids. I automatically headed towards the crowd in order to take in the “joy” of the spectacle. As I got even closer the reality of what was happening dawned on me. I couldn’t have been more wrong in my assessment of the events.

I soon realised that there was not a child in sight. What I was witnessing was a crowd of people, mainly women, venting their anger outside the local government building. Stood in front of them, forming a barrier, was a line of police armed with huge sticks. I wanted to film it on my phone, but decided against it as there was no way of me doing it discretely. The crowd was really letting off steam, and I couldn’t help but admire the bravery of those women in the face of injustice. I went on my way with the sound of the protests accompanying me for what seemed like an age, until it eventually faded in the distance. Quite often in the history of our species it has been women of great courage who have helped to bring about positive change in the world, through their bravery in the face of adversity.

The other thing I wanted to share, which really put a smile on my face, was something I saw in Kathmandu and Pokhara on several occasions. I observed packed buses going by with musicians on board going at it full-throttle. It was an incredible sight to behold. There were tabla (drum) players and others playing crazy brass instruments, similar to those played by the Buddhist monks that I mentioned in my previous post. It seems to be just a normal part of every day life in Nepal. Below are some more pics for you to enjoy. 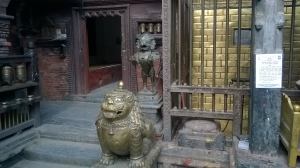 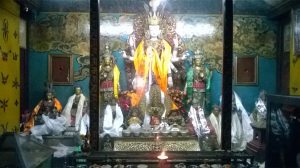 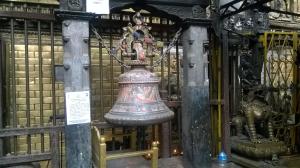 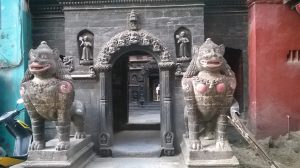 Entrance to The Golden Temple, Patan