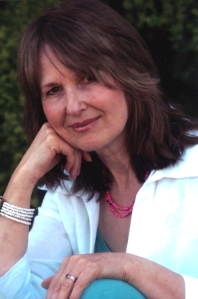 Today I am welcoming Writer Moyra Irving to my blog.  Before we have our chat here is a little bit about her.
Moyra is a storyteller and artist who has been involved in healing and spiritual growth work for over 30 years. The foundation of all her work, both artistic and practical, is ‘Soul-centred living’ and the recognition that we are all divine. Her stories are modern-day parables, all based on one theme: Coming Home to Your Self.
Through personal retreat she has created two sets of Guidance Cards, ‘Take Me to the Mountain’ and ‘Fiery Love,’ and six meditation and healing CDs for those wishing to retreat while living and working in the world. Storytelling provided the inspiration behind her charity The Extra Guest (Food for All), an end-hunger charity that supports food-aid and sustainable living projects around the world. Please contact Moyra on Facebook https://www.facebook.com/moyra.irving  or visit http://www.theextraguest.com/
Thanks for coming all the way down from Stoke-On-Trent Moyra for tea, twiglets and witty banter…  So, what actually made you start writing; was it some kind of inner pull?
My pleasure Richard.  Well, I love reading and I suppose I’ve always been a day-dreamer so ideas for stories come easily. I enjoyed English at school, especially learning about the structure of language. Some people have a natural ‘feel’ for language and write flawlessly without ever having to think whether something sounds right or not. However, for most of us I think it helps to know the basic rules of one’s own language whether writing factually or exercising the imagination. The two go hand in hand for me. Once the ‘rules’ of writing are mastered they can be put aside or skilfully ignored in order to create an effect. Some people think that grammar and spellings don’t matter – but imagine a composer attempting to create a symphony without any knowledge of music or an artist with no knowledge of colour or perspective or basic drawing skills.  With the right tools at our disposal we can eventually go beyond them and allow our imagination full rein. Perhaps only then we begin to create something worth reading.  Oh dear, are you still there? I think I went off on one for a while

I haven’t gone anywhere Moyra, I’m hanging on to your every word!  It seems to me that ‘The Extra Guest’ has a hint of autobiography in there, is this true?
Ah yes, the story. Thanks for bringing me back! It’s actually based on a novel I began in 1995. The ‘Extra Guest’ excerpt came to me while I was enjoying a bath. Most ideas come to me then – and often while I’m driving, walking in the countryside or, best of all, sitting on a train. Although Myrrnah, the character in the story, is very loosely based on me, she has actually directed the current phase of my life (and not the other way round). It was because of her that I decided to set up a charity similar to her own.
Tell us about your other projects, including The Extra Guest charity?
Other projects?  How much time have you got, Richard? I’m slowly completing a novel, ‘Hunting the Hart,’ which weaves together my interest in art, spirituality and human love, I’m working on two non-fiction pieces too: ‘Take Me to the Mountain’ and ‘Fiery Love.’
Two years ago, with the support of a group of friends, I set up ‘The Extra Guest’ charity: www.theextraguestcom  In recognition of the ‘extra guest’ at our table – that is to say, anyone who has little or no access to food – we promote the practice of ‘ethical dining.’ We work with restaurants that are willing to support our cause and diners are encouraged to make a donation at the end of their meal.  All donations go directly to fund food-aid and sustainable living projects around the world and we can proudly claim that nothing whatsoever is lost in administration. People are quite suspicious of charities these days and so we feel it’s important to reassure them that their money (100% of it) goes directly to those most in need. We all work as volunteers, covering overheads ourselves, and in less than two years we have raised over £20,000.
I’m also a healer and counsellor and eight years ago I set up (together with a small group of friends) The Centre for Spiritual Growth and Healing in Newcastle-under-Lyme, Staffordshire. As part of this initiative we offer a monthly Free Complementary Healing Clinic for the local community. We run entirely on donations and provide a ‘heart centre’ where people can come for inspiration, spiritual companionship and healing.
You are also an artist, I understand?  Tell us something about this aspect of your work?

Yes, I almost went to Art School at sixteen to study graphic design but ended up staying at school to finish my A levels in Modern Languages instead. In my first few years as a teacher I taught both art and languages.
Although I always loved to draw as a child – Life Drawing and Portraiture in particular – I am now inclined to more esoteric, abstract work. As a student in Paris I loved  the French Impressionists’ ability to paint ‘light’ and I think this may have influenced my work, although in a more abstract way.
What are you working on at the moment?
In my head, quite a few themes. However, time doesn’t allow me to paint and write so for the moment writing is my focus.
OK, I am an alien, I’ve just landed on Earth, and you are the first earthling I meet.  What’s my first impression?
That’s for you to decide, Richard! (Hmm … do I really want to know your first impression of me?) Actually, I’ve always felt like an alien myself, especially when younger, and my attempts to ‘fit in’ had varying success. Fortunately, the older one gets the easier it is to be oneself. I’m a very friendly alien anyway – like the Space Brothers, just ‘here to help’! (With apologies to Gerard Aartsen, author of a book by the same name).
What was the first record you ever bought?
Bill Haley’s ‘Rock Around the Clock.’ I was very young so can perhaps be forgiven! My taste has changed a lot since those pre-teen days. (Surprised you owned up to that one Moyra! Ed.)

Who is your favourite band and have you ever seen them in concert?
What a difficult question. There are so many – but I definitely can’t leave out The Who. I never tire of hearing them but didn’t get to see them live. However, I did see the Beatles and the Stones (both in Paris during my student days) and later, Leonard Cohen and Eric Clapton whose earlier stuff I like very much. I don’t have a current favourite but enjoy rock music, though not exclusively. Off the top of my head I’d include: The White Stripes, Guns n’ Roses, Florence and the Machine, and Calvin Harris. Please don’t ask me if I like James Blunt or I may have to be rude … (Some great bands there Moyra… and my lips are sealed with regard to James Blunt! Ed.)

What is your claim to fame?
I make no claim to fame – infamy perhaps but not fame. I suppose the sort of answer you might be interested in would be this: Mick Jagger was one of a group of friends and he did my Maths homework for me. He is a few years older than me (we girls weren’t interested in boys of our own age). He used to play tapes of his own music at parties and we’d all shout, ‘Take that rubbish off, Jagger!’ Two years later he was on the radio with a hit single ‘Route 66.’  For some unknown reason he decided to send me his Rugby football shirt for my birthday one year. He was, as you can imagine, very narcissistic, very sure of himself. And I, (very young, very innocent), tried desperately not to feel flattered and therefore sent it back, pretending to be piqued. It was maroon and gold and had his name stitched inside. Shame, it probably would have fitted me perfectly.  Had I only known then – I could have auctioned it and would be a rich woman today.  (Wow!  Sir Mick Rubber Lips himself!  Presumably it was his mum who sewed his name into his rugger shirt so he wouldn’t lose it? Ed.)

And finally… one more question.  As the world holds its breath… Marmite?  Love it or hate it Moyra?
Marmite – definitely a reason to hold one’s breath! Love it,  but don’t indulge.
Marmite lovers are always welcome on my blog Moyra!  Thanks once again for coming and all that remains is for me to inform the readers that on Tuesday and Wednesday of this week I will be featuring Parts One and Two of The Extra Guest Story.